The AXIOM Recorder is a software package that can be used to record video from the AXIOM Beta or AXIOM micro cameras. It is a pure command line application that is able to receive data via multiple interfaces (such as USB3 or Ethernet) and write the contents in different formats to disk. It also features a flexible pipeline-processing approach that allows the user to compose processing nodes (such as a USB3 input node, a debayering node and an MP4 output node). Likewise, it is even possible to get a live preview via a “preview” node.

However, the CLI based interface of the AXIOM recorder is difficult to use outside a lab setting. For example, the recording workflow previously consisted of switching between preview and recording pipelines on the command line. To be able to use the AXIOM recorder outside the lab, a GUI shall be implemented!

On the quest for a suitable GUI framework

Because the rest of the axiom recorder is written in Rust making use of Vulkan for GPU acceleration, it makes sense to have the UI also written in Rust. Additionally, an efficient data sharing mechanism (preferably zero-copy) between the vulkan based processing steps of the recorder and the UI framework is necessary to achieve the required performance on modest hardware.

Both traditional libraries (QT, GTK) and novel libraries written in Rust were considered. However, it was found that all the libraries had severe problems that make them unsuitable for building the AXIOM recorder UI:

First, a lot of consideration went into the user facing API and UI design pattern of the UI framework.

Because the author (and many other people) had a good time with react it was decided that narui would get a declarative-style API that mimicsreact.

Especially close influence were “new style” react components that are just plain functions. State management should be done using a mechanism similar to react-hooks. This is realized in narui by the means of unique keys that get assigned to each widget. These keys are basically pointers into a data structure that is used to store state.

For more details on the concrete API, see the narui readme.

react in rust? Macros to the rescue!

Since react relies heavily on the jsx syntax extension to javascript, it is not straightforward to build a UI library with a similar API in Rust that is still ergonomic to use. Fortunately, rust allows developers to write really powerful macros that can run arbitrary code at compile time and therefore implement complex additions to the language.

These proc-macros allow us to write an rsx! {} macro that accepts jsx-like syntax and semantics inside. Fortunately, there is already a helper to parse xml/html like syntax: the syn-rsx crate. Additionally, the lack of keyword (and default) arguments makes it hard to implement correct semantics for the rsx macro since it is inherently keyword argument based (e.g. <rect border_radius=Some(Points(20.)) />). To implement keyword arguments, an “attribute macro”, with which one has to annotate all widget functions, is used. This proc-macro generates a normal macro that implements keyword arguments according to the function signature. This macro is then used by the rsx proc-macro. Quite a rube goldberg machine!

In the end, this machinery provides a convenient API to compose a hierarchical tree of widgets. Furthermore, the combination of the macros make it possible to implicitly pass a context struct to all widgets without any additional user-written boilerplate.

Finally, to make on demand execution of the widgets possible the macros convert each widget into a closure that can be called down the line.

Each widget in narui can be either A composition of other widgets without layout / render information attached to itself (e.g. a button or a slider) A “primitive widget” that features layout information and optionally rendering instructions (e.g. a rectangle or text) The “primitive widgets” are collected into their own tree that is then used to calculate the layout using stretch. The stretch crate provides a pure Rust flexbox layout implementation. Flexbox is a technology widely known by developers who are used to the react API.

Text drawing was implemented with help of the glyph-brush crate. glyph-brush generates a texture atlas containing a rasterized version of the font glyphs using a CPU font rasterizer as well as text shaping information. These are then combined to render the text as a series of textured quads`

All other shapes are drawn by tesselating them with the CPU based tessellator lyon, which produces triangle strips that are then drawn with the GPU.

Input handling is done in the most naive way possible: checking each input element for collisions on every click / mouse update.

All this effort led to the first moment of great serotonin: the first narui demo:

After these foundations were laid, some basic but useful input widgets could be implemented. Also, basic classic UI-framework demos were possible.

To make declarative UI competitive in performance, it is crucial that not everything is re-evaluated, re-layouted and redrawn every frame. Thankfully, narui was designed with partial re-evaluation in mind.

The most challenging part of delta updates in the context of narui is partial re-evaluation: Only these widget functions that depend on changed state or whose input changed should be run. To achieve that, all arguments to widget functions need to be stored and compared to the prior value before the actual function is run. Values that are comparable by value are compared by value, while for everything else pointer comparison is used. This is somewhat tricky to implement in stable rust.

State in narui is stored in a tree, to which widgets can obtain references using the context that is passed to them. Because a widget needs to be re-evaluated if either the state it depends on or its arguments changed, an obvious choice is to store the arguments in the normal state tree. This however comes with a cost: Since the state tree entries that are used to propagate widget arguments are only updated after the widget is evaluated, one needs n delta evaluation passes for a n deep hierarchy of changed widgets. This, however, seems like a reasonable tradeoff to make to simplify the complex problem of re-evaluation.

A lot of time was spent to implement sound re-evaluation, and it happened multiple times that some new edge case was found and large portions of narui (including the data structures, all the delta eval code, and the macros) needed to be rewritten.

Delta re-layout in contrast was a breeze to implement. stretch already supports delta re-layout and after the implementation of delta re-evaluation it was also clear what updates to set in the stretch layout tree.

Partial re-rendering is currently not implemented by narui. This is because the time spent on actual drawing is insignificant for any known narui use case yet. However, the tesselation and font rasterization are cached.

After all the foundations of narui were laid, it was time to build a more complex UI. Because it is clear that it would be desirable to have a visual representation of the (already node based) processing flow inside the recorder, a node graph was built for that “kitchen sink” test.

That process proved to be really valuable for validating the API of narui, both conceptually and implementation-wise. For example, it showed that the addition of the context.post_frame hook, which allows executing code after a frame was rendered, was necessary.

Also, the addition of context.measure* hooks were introduced which allow the widgets to use information from the layout pass. This proved to be invaluable for input handling in the node graph.

Towards a usable GUI for the AXIOM recorder

In the beginning, as a guideline for the necessary capablities narui minimum viable product, a sketch of the axiom recorder UI was created: 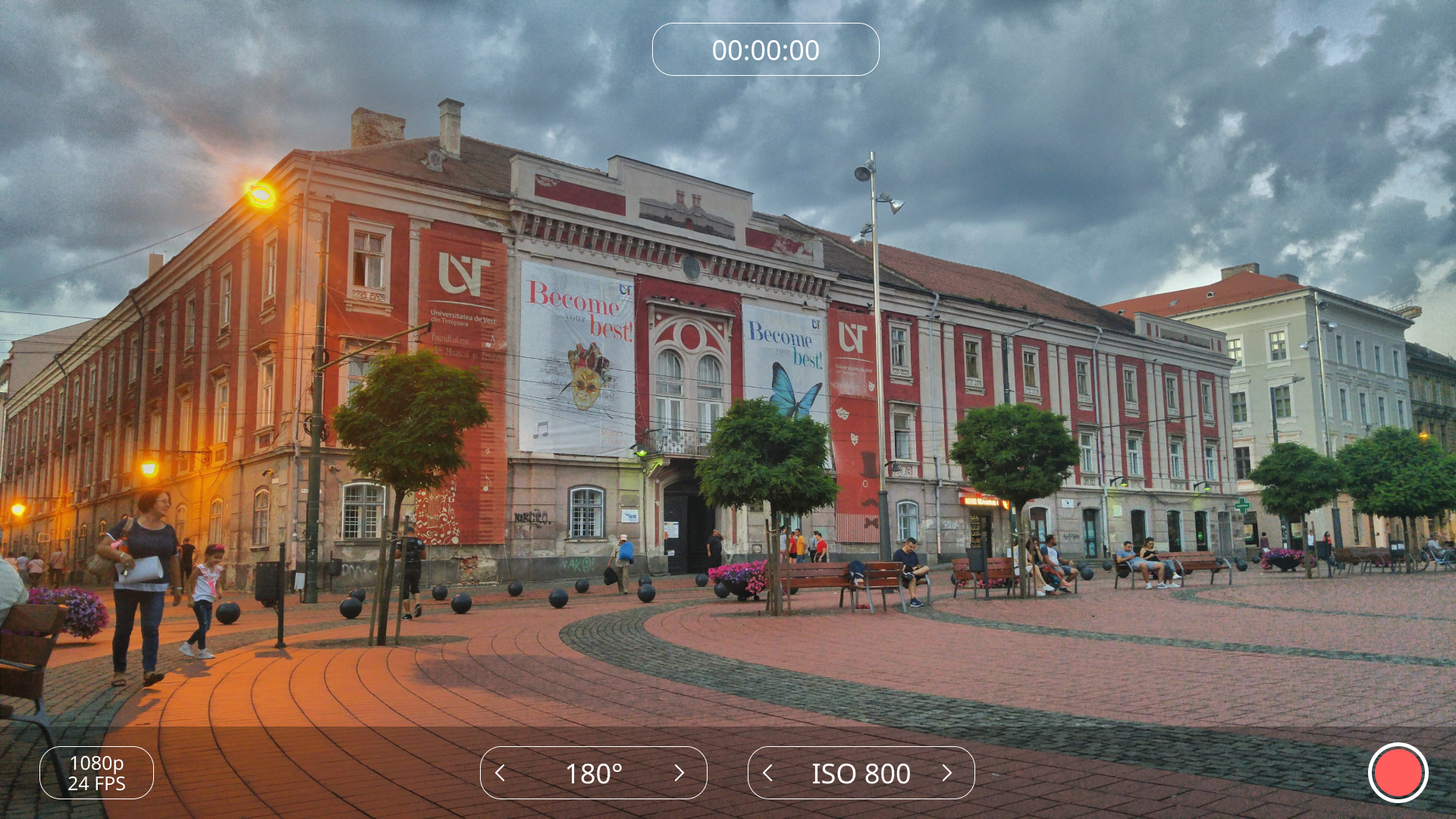 Currently, the AXIOM recorder is still in a click dummy like phase: No real recording can happen, a connection & settings dialog is missing, and the pipeline is hard coded. That said, it still validates that the UI framework

For narui this is text input handling, z-ordering / draw ordering, optimized hit box testing and the implementation of a clipper, that allows the creation of things like a list view. One further plan to improve narui is to abandon stretch for layout and implement a custom layout engine that implements a flutter-style layout algorithm. This would be beneficial because stretch is unmaintained and better performance and flexibility could be achieved. This work is already started by (@vup).

All in all, building narui was great fun (many thanks to @vup, who was a wonderful mentor). I deepened my understanding of rust (especially regarding proc macros) and intricacies that go into building a declarative UI framework with GPU rendering (like partial re-evaluation).

narui promises to be really helpful for the future of the AXIOM recorder and hopefully other applications.